Put a great Judge, a fabulous organizer, seven hundred and fifty parents and community workers who love kids together at the Grand Wayne Conference Center in Fort Wayne, Indiana and you have a terrific force for the good of children and youth!

Judge Charlie Pratt, who is revered and inspired by everyone who knows him has been running an annual Conference on Youth for parents and community workers in Fort Wayne for 22 years! His passion is helping kids in difficult situations and their counselors, supporters and parents to succeed. This year the conference was called "Great Kids Make Great Communities".

We became more and more impressed with Judge Pratt as he gave a thoughtful speech about entitlement as he introduced us and offered a beautiful prayer at the beginning of the conference and again at lunch thanking and asking for help from a higher power for their success. He was humble and unassuming…the last thing he would want is for anyone to think he was important. He helped cleaned up the board room after the event and was the last one out. He even helped me look for my phone, which I lost at lunch (and is gone forever. Shucks!)

Richard and I with Judge Pratt: 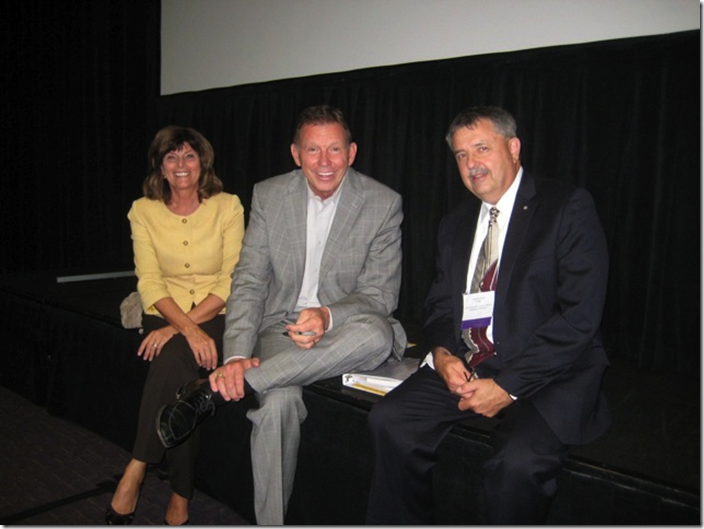 The event included three keynote speakers of whom we were delighted to be one (well actually two) and several workshops. Ideas from The Entitlement Trap were fun to present to a very receptive audience.

As we sat at book signings during the day we were blown away by the stories of the good people who stopped by: so many parents who had fostered countless kids and adopted the ones who fit into their family and a cute young dad who said his life turned around when, as a 16 year-old African American juvenile, he was told by a police officer that within ten years he thought he would probably be in prison. In actual fact, in ten years he had taken that man’s job! His name tag said "Detective" which comes after much training as a police officer.

The other keynote speakers were amazing! Clay Roberts told us how to make a difference in the lives of young people and had us reminisce about who had made a difference in our life as a youth. It was very compelling!

The last speaker, Tricia Downing, was an amazing woman in a wheelchair who walked us through her life, first as a first class bicyclist, and then after being hit by a car on her way home from a long ride (shades of Jonah), was told that she would never walk again. The story of her journey of recovery which included never saying "I can’t" was incredible! After many years of unbelievable will and effort she participated in the Iron Man race in Hawaii (she swam backwards and used two different kinds of bikes operated with her arms in the other two events). I guess I’ll just go ahead and quit whining about the pain and numbness in my leg!

With thanks to Megan Kelly, the incredible organizer of the event, we learned so much about the "salt of the earth" that day.