We hope our Valuesparenting family has had a wonderful summer as it is quickly drawing to a close. Please forgive our absence from the blog as we have spent all of July at Bear Lake where our daughters and daughter-in-law join us for much of the month since their places of abode are not pleasant places to be in the summer! We have had from 18-36 people at our Bear Lake House to feed and bed down for almost every day of July!  What fun we’ve had!  The following is a make-up call and maybe more than you want to know about a fun trip we had with our oldest three granchildren.

With eighteen grandchildren 12 and under, we’ve realized that it’s essential to divide them into groups by age so that we can spend quality time with small numbers as well as enjoy “the mob”!  When our oldest grandchild turned twelve we had promised to take our oldest three grandchildren on a motor home trip. 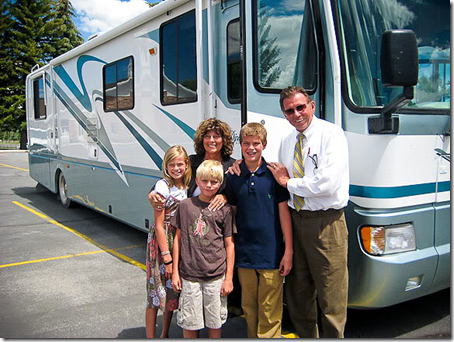 Since our oldest grandchild Max turned twelve on June 3rd, we borrowed my sister’s motor home and were set to take that first ever trip with he and sister Elle 11 and cousin Ashton 9 on July 12th…They have become better known at our reunions as “Group One”.

Taking a look at what we could see out of enormous windshield will give you an idea of the size of this moving house: 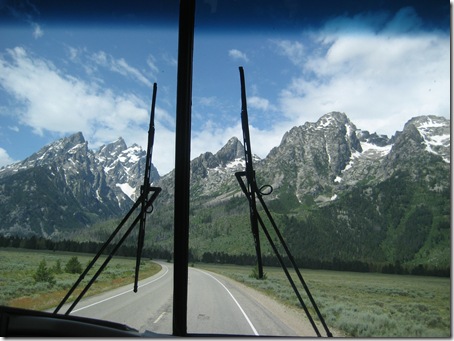 What a fun and crazy trio! 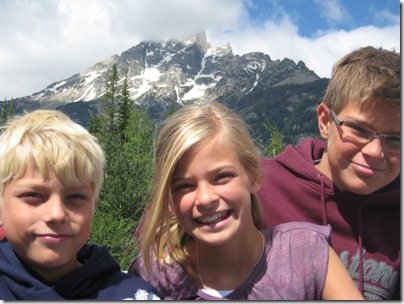 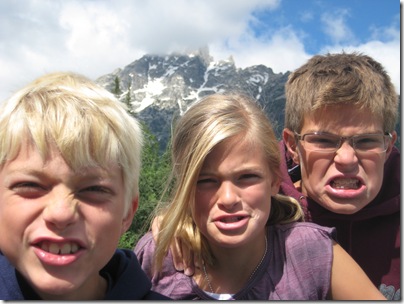 We had a wonderful time wending our way through Star Valley, complete with stories of multiple ancestors who settled that valley, then Jackson Hole where we spent so much time with our kids when they were little, especially during the UEA school holidays.

That night we parked in the parking lot of Teton Shadows, the place where we owned a condo for 30 years, which brought back so many fond memories.

The next day we saw fabulous scenery 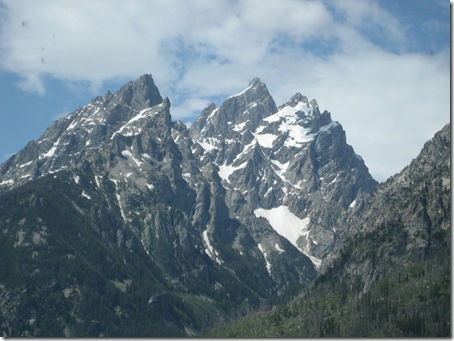 and the kids entertained themselves on the long drives with taking pictures of themselves in the RV, loving looking like something from transformers? star wars? iron man? 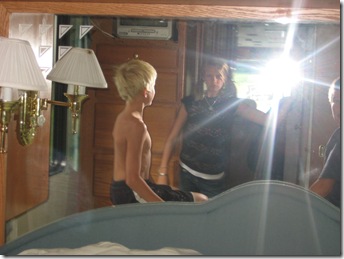 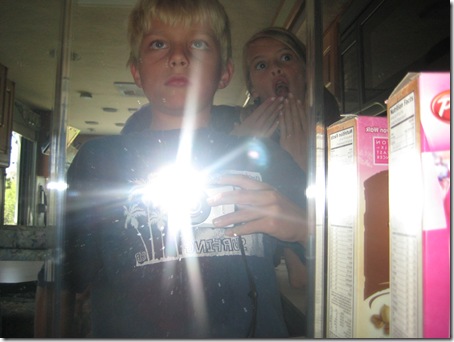 and playing the guitar 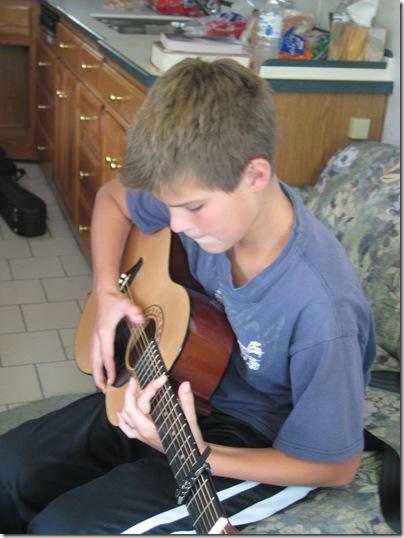 and learning a song from Grandfather about the things they were going to learn on that trip. To the tune of "I Love to Go a Wondering" except the words were, “I Love to Go a Motoring with Grandfather and Gram. And as we go we laugh and sing, into my head they cram Religion, Politics, Ancestors, Fama la ha, ha ha ha ha, Family, Religion, Ancestors, Politics" (try singing that in your head). Needless to say many interesting conversations followed!

The kids loved the frequent stops along the way to explore the beauties of nature: 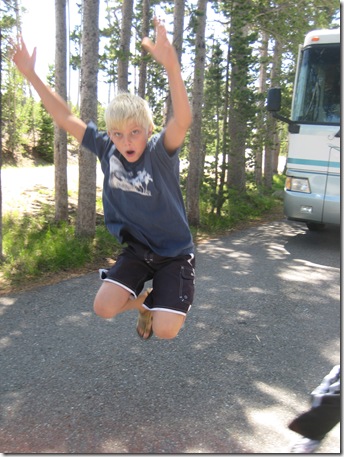 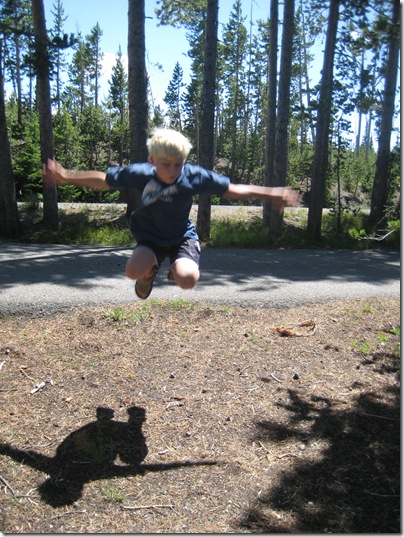 After a ridiculous amount of construction on the roads, we arrived at one of the great wonders of the world: Old Faithful. We ran to buy sweat shirts for souvenirs and also because the kids were freezing and saw Old Faithful blow off once before we had dinner at the Grand Old Faithful Inn. We tasted buffalo and had so much fun in that historic old building, the scene of one of the most poignant moments in The Awakening, Grandfather’s novel from long ago.

After another shooting off of Old Faithful and some mighty good ice cream at the ice cream parlor, we settled into our “house” parked on an outer parking lot where we settled down to read a book we had bought from the author in the lobby of the hotel…a children’s story about Yellowstone Park called, The Eye of the Grizzly, when we looked out the window at the meadow beside us to see two enormous mama buffalos with their babies just outside our window: We immediately decided that this was the place to stay and had just settled down for a well-deserved night’s sleep when someone banged on the side of the RV AT 11 p.m.. It was a Park Ranger who informed us in no uncertain terms that we could NOT park there for the night. When Grandfather asked politely where we should park, he said that RV’s were not allowed to park anywhere in Yellowstone Park except for a few isolated places that had been already fully reserved months in advance. Oops!

We had planned NOT to go back through all the construction and delays we had experienced during the day but to go home another way. But in looking over the map and our timetable, we decided that back the way we came was the best way…and that it would probably be much faster in the middle of the night without the long lines of cars and constructions workers out with their signs to stop us.

Were we ever wrong! In the middle of the night was the very time that these guys DO their heavy construction. So with that along with a crazy driver full of road rage who stopped right in front of us after passing us in anger because we had been going so slow through the mountain pass, watching for animals to jump out of us in the middle of the night and nearly killing us all, we arrived safely back at our usual parking lot at Teton Shadows at about 2 a.m.

The next day we journeyed on to Jenny Lake, where we had a fun boat ride across the lake 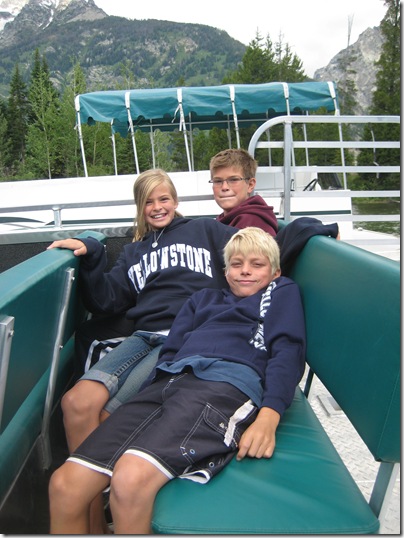 and a hike up to Hidden Falls 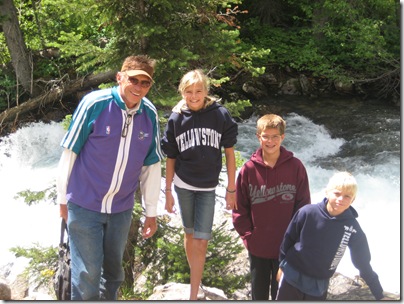 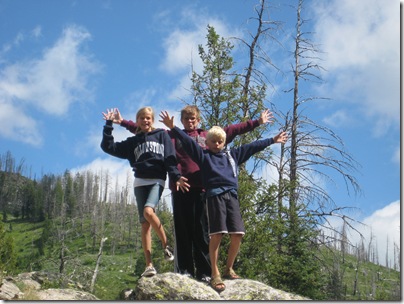 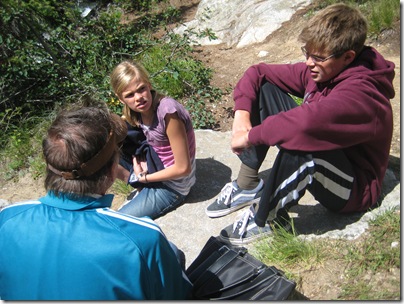 Complete with a few teaching moments by Grandfather

Especially with Ashton who somehow got lost during our ascent. 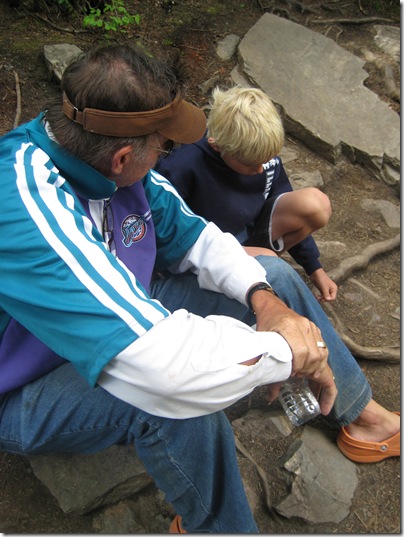 It was a gorgeous hike and a most memorable day: 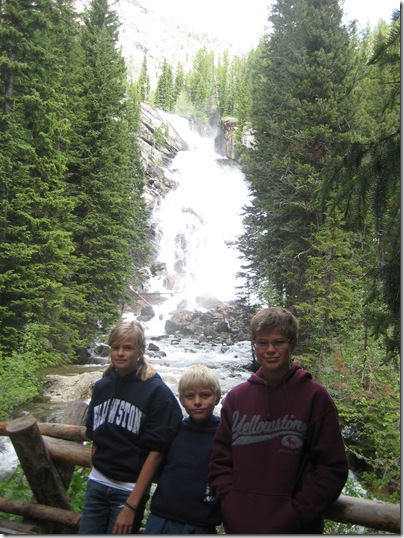 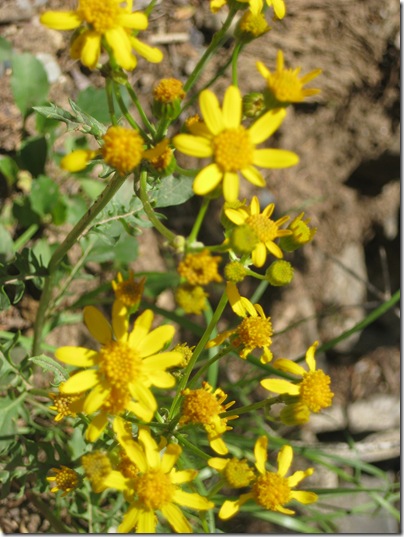 That night the kids were lamenting the fact that we had to go back to Star Valley for the night so that we would be closer to home the next day. The water pump had gone out at the Bear Lake house, and the “fixers” were coming at noon the next day. The reason they wanted to stay in Jackson was that as luck would have it, the new Harry Potter movie was coming out that very next day with the first showing at midnight! People were already lining up at the Jackson Theatre at 2 p.m. We slummed around Jackson for a while and of course, went to our beloved Billy Burgers for giant burgers before heading for Star Valley.

As much as the kids wanted to see that movie they were good about seeing the necessity of being back to the lake.  I was quite sure that there wasn’t a movie theater in Afton, where we planned to spend the night.

When we got to Afton, we parked the RV on Main street and when Grandfather went into a store to ask if there were any theaters in town we looked across the street and what should we see but this…. 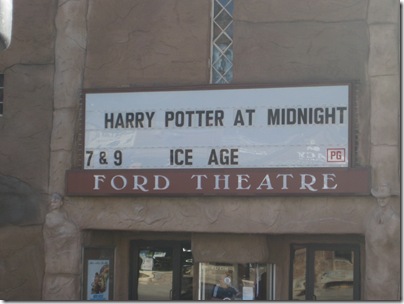 The kids threw their arms in the air as if it was D Day and were over the moon as Grandfather went across the street and bought the tickets. We tried to get them to take a little nap before wewent, but they were just too excited! 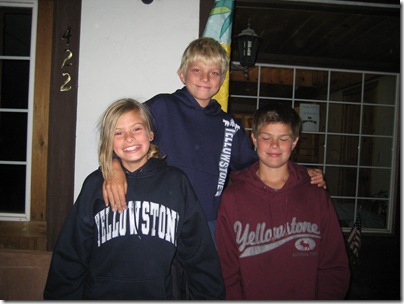 We started lining up at 11 p.m. and it was SUCH fun to be there with a packed house of men, women and children, all hysterical about Harry Potter. Sadly, Ashton just couldn’t stay awake! Max and Elle did all they could to keep him awake but after about the first 45 minutes, he just couldn’t be aroused.

We sleep-walked him back across the street to the RV afterward: 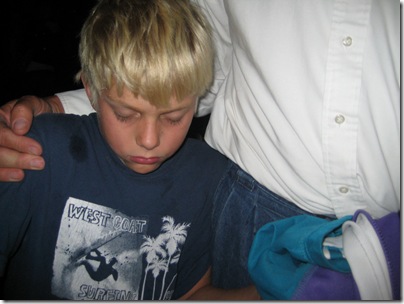 Was he ever mad when he woke up and realized that he’d missed it!!! It was pretty funny…and fun because we know he’ll get to see the rest at a later date! What a lot of fun that kids is…as are magnificent Max and elegant Elle!

We arrived home the next day just in time to meet the plumbers having had an adventure that none of us will ever forget! We decided that the official name of Group 1 is now THE OLD FAITHFULS because these three are not only the oldest of all the grandchildren but are going to be an example of faith and strength to all the other kids of Eyrealm. We are so blessed to have these three stalwart examples of goodness and creativity to show the way to so many other cousins of Eyrealm who will be looking up to them and following in their footsteps! 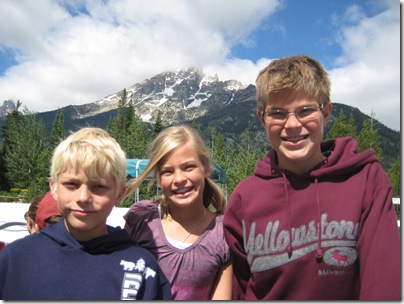