Since this was a Christmas when our married children with their little ones would not be arriving at our house until after Christmas, we decided to take our single children Josh, Talmadge, Eli and Charity on a service expedition to Mexico. The expedition was organized by Ascend Alliance and the wonderful Garbett Family who have been working with the Mexican people for about eight years. They have seven children and have been providing scholarships for many gifted kids who can’t afford to go to high school without their help.

Our only Christmas gift to these four single kids was the expedition but we did have Christmas stockings the morning we left stuffed with work gloves, hand sanitizer, imodium and some gummy bears for the road! We left our house on December 21 in a wild flurry having lost (30 minutes before departure) Charity’s passport. I had absent-mindedly put it in the garbage along with a pile of Christmas card envelopes. Only slightly soggy and in good condition I found it about half way down in the trash compactor.

After that adventure, the real adventure began complete with sitting on the tarmac on our plane transfer plane in Las Vegas for an hour because there was a black-out at the Mexico City airport which caused us to miss the last bus at 2:30 a.m. to the village of Puebla, the site of our first project. A cute little old Mexican “guardian angel” rescued us and found a suburban driver who transported us to the village in time for our service project which had been planned by the local high school scholarship students (an annual requirement for all those who receive the Garbett scholarships).

All day we cleaned the community park, sweeping and painting and enjoying the Saturday community cultural events which included a mass that ended with fireworks at the church, two weddings and a basketball game between the Mexican kids and the gringos (Mexicans won). The best part of the day was going to a sweet lady’s home who had several children, most who begged or sold things on the street so that one of her sons could go to high school in Mexico City through the Garbett’s scholarship (the family is required to provide ten percent of the tuition). To show her gratitude, this valiant mother, no taller than four feet six inches, invited thirty two of us which included the three other American families who were helping with the project, as well as all the twelve scholarship students and some of their parents to her humble two room concrete and adobe home for dinner. Her home had been all set up with tables and chairs (who knows where they had come from?) and hundreds of homemade tortillas as well as a large hamburger patty sized delicacy made of cactus and dried shrimp with a red sauce over it. She and her family and neighbors had worked diligently all day to provide a lovely meal for us. Apologetically, she said she was so sorry that it wasn’t what we were used to. We did our best to eat as much as we could and look as though we loved it! 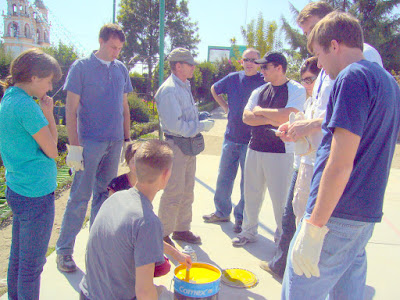 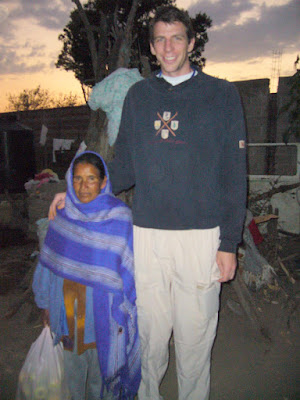 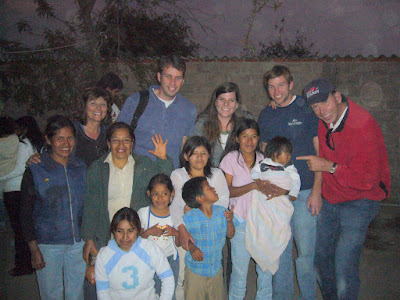 Christmas Eve was spectacular with actors for a live nativity proceeding to one of the hundreds of Catholic churches in the area just as we got off the busses in Chiapas near the site of our next project. We were treated to a lovely “Posada” dinner by the family of the local organizer of the expedition and we laughed hysterically during the fun of breaking several Piñatas. At midnight we were outside and listened to what sounded like the world literally exploding with fireworks. It was a Christmas Eve and following Christmas Day that we’ll never forget! We fell in love with the sights and sounds of Mexico.

The day after Christmas we were all excited to do our next project which was all about cleaning and painting a room which would become a medical clinic in a remote village up in the clouds (about 9,000 feet) called Chojelo! On our way up the narrow dirt road on about a 45 degree incline in a van with a very brave native driver, we passed by the two local missionaries we had sat by on at our Christmas Eve dinner! They followed us on foot to the village and helped us as we cleaned out a large room in one of the buildings in the run down community center that could be used for a health clinic. The villagers were far away from any health care and the State had told them that if they could get a room ready, they would send in a medical team twice a week. We swept floors, cleaned and disinfected walls and then painted the outside yellow and the inside while. The guys also used the tools and plywood they had brought to enclose the top of the walls which were open to birds and animals. Some repaired broken windows and even went back down to the nearest village for a soldering iron to fix the falling-apart metal door.

In the next room three women built a fire on the cement floor and boiled a huge pot of water in which they cooked a hunk of some kind of very tough meat and a vegetable something like cabbage leaves. These women were amazing and our soup, prepared on only very special occasions was delicious!

While we were waiting for the guys to come back from town with more supplies, we took a walk-about in the village. Charity, our youngest daughter gave candy to the local kids who were either delighted or terrified to see big white people approaching them. One of our local helpers as we prepared the clinic was a young mother named Lucia. With a two year old slung on her back, she offered to show us the church as well as her home. Delighted with the offer, we trekked down the hill and through the corn fields and found a perfectly lovely little church on a steep hillside. How they got all the cement there to build that, we have no idea but it was wonderful to behold!

Then she took us to her home, another twenty minute walk on steep mountain paths. With her little two year old peacefully sleeping in his sling she proudly showed us her kitchen with little chicks running all over, a little play spot on the dirt floor for her baby and a small hammock where he could sleep while she ground the corn. The grinder was her only kitchen utensil! Her husband had built the three structures on their property himself. The closet in their “living room” consisted of clothes, folded in half over a clothes line strung from wall to wall. We saw the pride in her face as she showed us her home and let us know that she did not take the spectacular view for granted! The air was clean and clear and the spectrum of the scenery from their house was truly a feast for the eyes!

As I looked at that woman’s face full of peace and wonder and pride, surrounded by family and neighbors that she loved, a lovely garden and food she produced with the labor of her own hands, I couldn’t help but think of so many Americans completely frazzled by the Christmas rush and the Christmas “stuff” and wondered if the contentment on Lucia’s face in her “third world” could make her “better off” than many of us. What a privilege it was to experience with her, the true meaning of Christmas!

As I re-entered my real world the next day and the intricate complications in our comparatively luxurious home and faced the challenge of feeding and finding places for 28 people to sleep for five days, I was of overwhelmed with the love and joy I felt in having most of our family home for a few days to celebrate the holidays and special family events together. I was also thinking of those dear people we had encountered on our fabulous expedition and of my favorite word: REMEMBER!